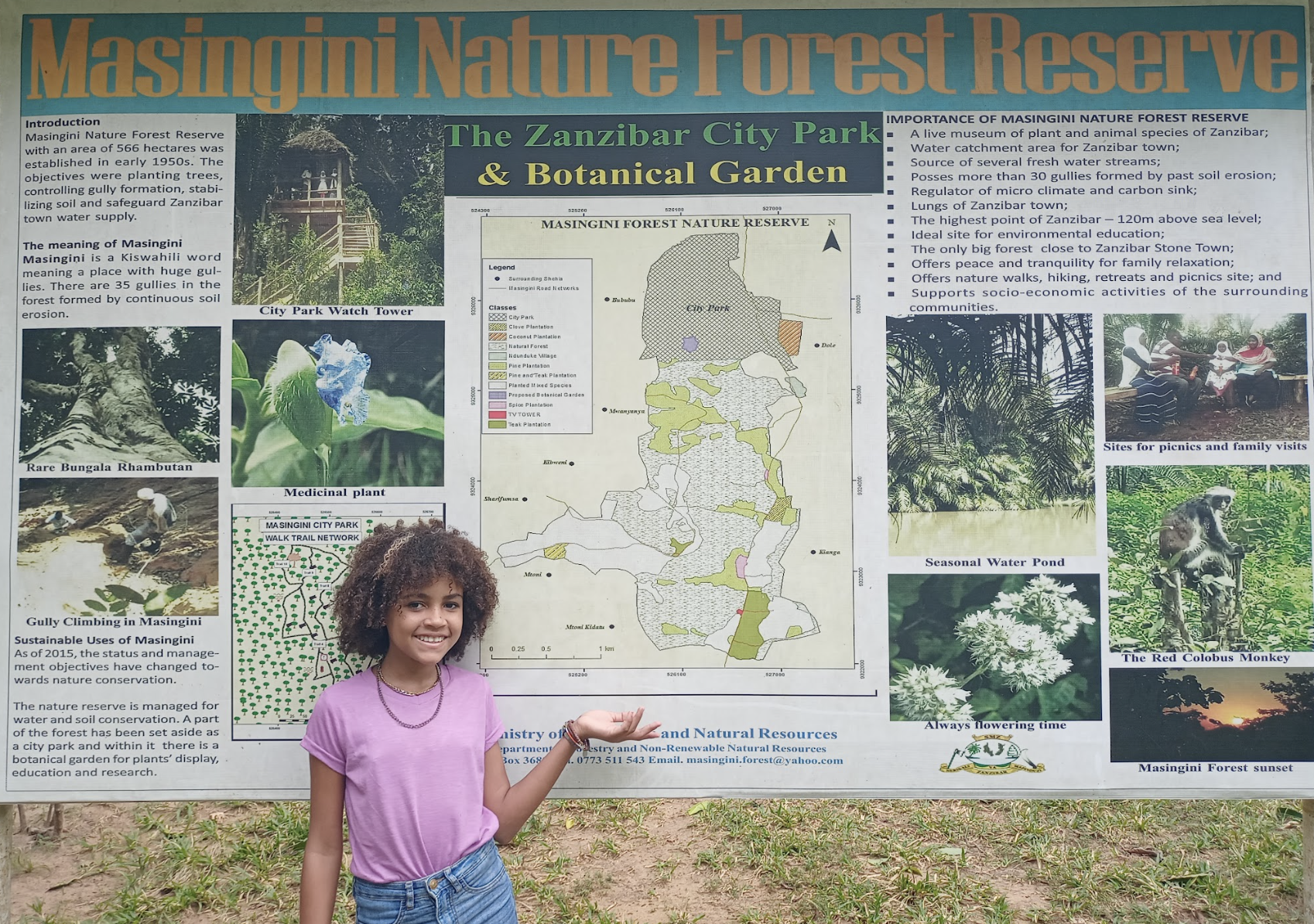 A tale of spiders, shrews and Mimosa

It’s a hidden gem, a fairy tale forest, a jungle to explore – and Zanzibar’s main source of fresh water, the Masingini forest. Our adventure reporting team, Michael Clarke and daughter Tulie, once more went for the unknown.

As we drove down a dirt road on the way to our first visit to Masingini forest, I was pretty happy that I was driving a 4x4 as it had recently rained and the road was slippery to say the least, as they say - the devil drives Prado. Masingini forest is a hidden gem in Zanzibar, one of those "the road less travelled" kind of places, and less visited than Zanzibar’s other jungle area, Jozani forest. It's situated inland to the north, where all the spice farms are, I think we passed by 123 spice farms on the way, actually it could have been 321, but I stopped counting after seven.

We got there early, well Irish early, so at 10:30. As we waited in the reception area for our guide Sadik I took a wee stroll around. The first thing I did was walk straight through a massive spiders web, face first. With the soundtrack of my elven year old daughter Tulie laughing at me, I brushed off the web from my face and had a proper look at what ambushed me. I was pretty happy that I didn't get bitten by the freak of a spider (see photo)!

Sadik was informatively pointing out the general flora and fauna. Half listening to him I did hear him say Mimosa, immediately my ears picked up and I said well I wouldn’t mind but where on earth would he get a champagne-orange-cocktail here? Logically, as we were in a forest, it was actually the name of a plant. A creeper with a pretty pink flower whose shape is much like a dandelion. Sadik told us that it is famous in Zanzibar. People believe when put in tea it makes you more clever. This was fantastic as Tulie had exams at school the next week and so this would surely make her invincible.

Where the smurfs live

Masingini forest is actually the main water table for the whole of Zanzibar and Zanzibar Water Authority (ZAWA) are currently building a large infrastructure of a piping system, pump house and storage here which will hopefully sort out water issues around the island. Masingini means gullies in Kiswahili and the forest is home to some 35 of these gullies and gorges which collect the rain from the forest and experience different levels of flooding depending on the rains.

It is also the highest point in Zanzibar, and at the highest point in the forest you can see Bububu and the ocean, which offers a fantastic sunset. There is a huge number of Zanzibar giant millipedes in this forest, they are literally everywhere. I picked one up and put it in Tulie's hand for a picture. These millipedes are used in traditional medicine as an aid for paralysis, the idea is that when the millipede walks over the affected area of the body it will stimulate the nerves.

As in Jozani, there are also large troupes of colobus monkeys here, also snakes, dikdik's, and the largest elephant shrews I’ve ever seen. We could see the shrews darting back and forth down the path in front of us, I pointed it out to Tulie and Sadik, and one of them must have heard us talking about it. It ran straight towards us and crashed into the feet of Sadik, fell on its back and then picked itself up and disappeared into the forest on the other side of the track! Dunno what that was all about, but it does bring up the age-old question - why did the chicken, no, elephant shrew cross the road?

For us it was a lovely day out, something a bit different, easy to access and not very busy. The forest also has a few "picnic sites" and there is a plan for a zip line later. A word to the wise - I wouldn't wear crocs!