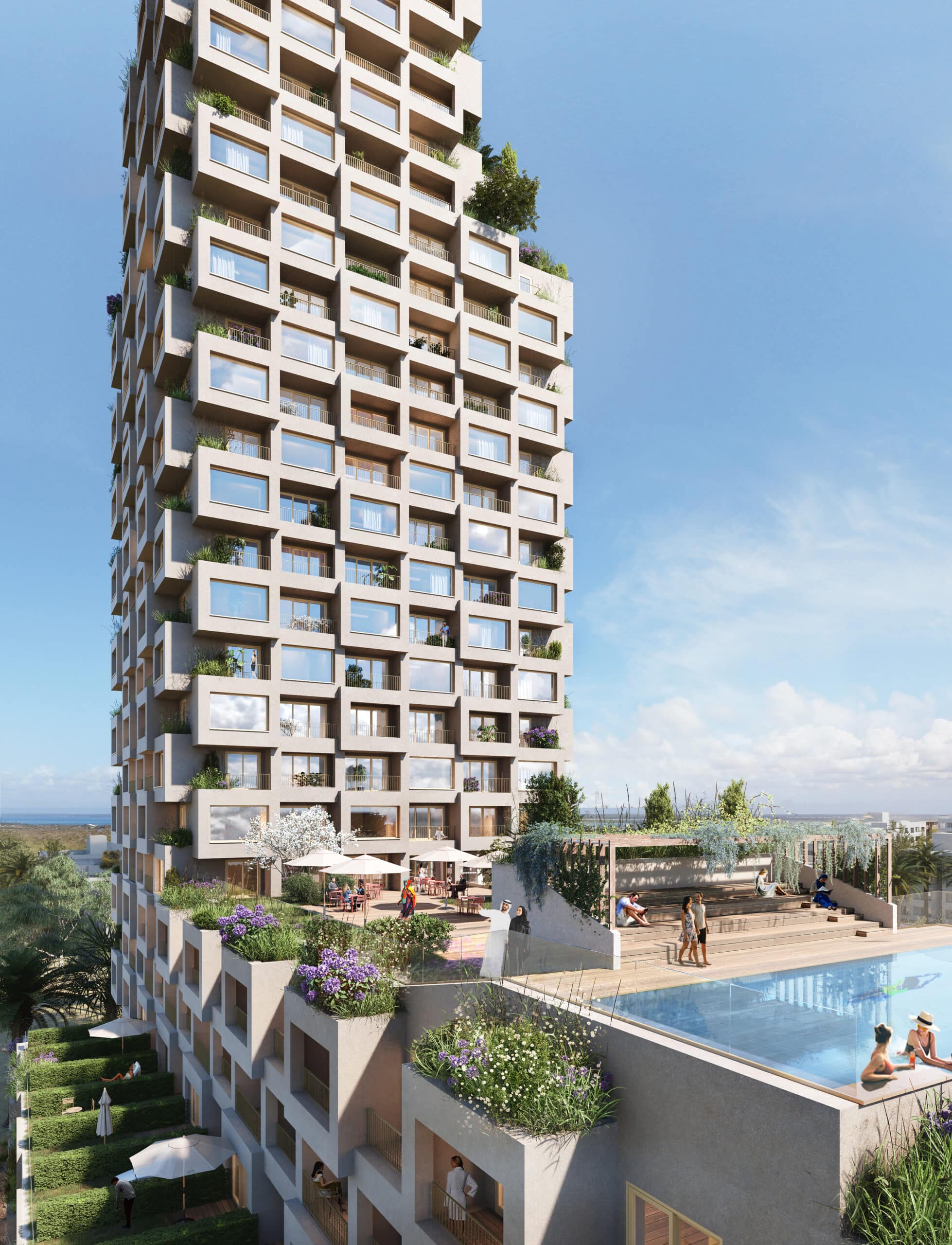 A world record for Zanzibar! The Indian Ocean island is planning the highest green building in the world - and nowhere less than in Fumba Town. Curtain up for the iconic enterprise

Breathtaking 360-sea views all around. A playful architecture resembling a beehive with plenty of green terraces from the bottom to the very top floor. Named Burj Zanzibar - “burj” meaning tower in Arabic - a spectacular, ecological high-rise building is planned for Zanzibar.

The apartment tower in high-tech timber design, 96 metres high, with 28 floors,  will be standing in the midst of new suburb Fumba Town overlooking the ocean on the west coast near the capital. “You’ll definitely see the landmark from the plane when you fly into Zanzibar'', promises developer Tobias Dietzold.

Once realised, it would instantly become a global landmark as the world’s highest timber tower and as Africa’s first high-rise ever in innovative technology. At the moment the 86.6-metre Ascent Tower in Milwaukee, US, holds the world record as the highest timber building worldwide.

Why such an architectural extravaganza for the small island of Zanzibar? Dubbed “vertical green village”, the residential tower with 266 residences is to be located in Fumba Town, East Africa’s pioneering eco-town developed by German-led engineering firm CPS. “The tower will be our landmark”, said CPS CEO Sebastian Dietzold, “but not because it’s a glamourous highlight but because it will promote responsible, sustainable buildings and trigger a whole new industry in Tanzania, from agroforestry to the production of engineered wood products.”

Fumba Town, the flagship CPS development and a growing satellite city near the capital, is already built on green and equitable principles and as such an unusual new model town for Africa. Stretching along a 1.5-kilometre seashore, it will eventually provide more than 5000 sustainable homes for all budgets and for around 20,000 people. Buyers of over 60 nationalities have invested here, the majority from Zanzibar, Tanzania and Oman. “The Burj Zanzibar tower is part of our mission to meet the massive housing demands in Africa in a responsible way”, CPS founders Sebastian Dietzold, 45, and his brother Tobias Dietzold, 38, explained: “We want to support a technology that protects our planet.”

Timber is the oldest building material in the world. As timber technology, it currently enjoys a renaissance because of its environmental benefits and longevity. New prefab timber products such as cross-laminated timber (CLT) and glulam are considered the building material of the future. A 4000-cubic-metre wooden building like Burj Zanzibar would bind about 3200 tons of carbon dioxide in its structure, whereas conventional concrete construction does exactly the opposite, causing 30 percent of ongoing CO2 emissions worldwide.

“High tech timber functions like a carbon battery”, elaborated Tobias Dietzold: “Burj Zanzibar will showcase the new construction technology and prove that Africa can do it, too”. Tanzania’s top skyscraper at the moment is the 157-metre Ports Authority building in Dar es Salaam, built with conventional concrete.

Specialists from New York to Switzerland

The Zanzibar tower is planned, designed and to be constructed by top specialists from Switzerland, Austria, Germany, South Africa, Tanzania and the US, among them the world’s most experienced high-tech timber producer, the company Binderholz from Austria.

Green power tower: 96 metre-high and with 28 floors, the planned Burj Zanzibar made of timber will stand in the midst of Fumba Town  (map above). The iconic landmark would create  attention to Zanzibar as a “green” destination. CPS director Sebastian Dietzold launched the project in Muscat recently (small photos).

Nothing tops this: rooftop penthouse in Burj Zanzibar. The sale of apartments with exquisite interior design and lush green outdoor spaces has commenced