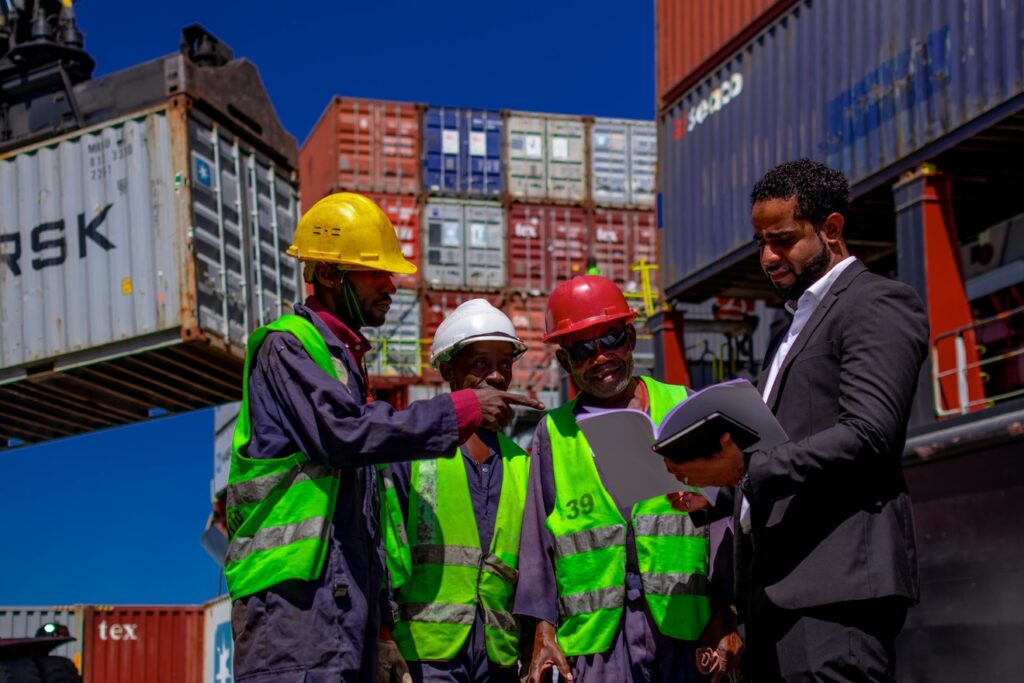 The man with a masterplan

Cargo delayed for weeks and others for months, ships queuing in the sea, and clients searching for their containers. Utter the word 'port' and the majority of Zanzibari will just moan. “Not to worry, everything will change”, promises new Deputy Director of the port, Akif Khamis.

When I paid Akif Khamis a visit at his office one Saturday, the new Deputy Director-General of the Zanzibar port was the only person in the building. I arrived loaded with statistics (worldwide median turnaround time…) and questions (How long does the off-loading of a ship take in Zanzibar?). First pleasant surprise, 30-year-old Khamis has got the answers. All of them.

0.97 days – less than one day – is the worldwide average turnaround time of a big cargo ship; containers are even a bit faster. Oman currently holds the world record in turnaround and clears container ships within only 12.5 hours,  says a recent report by the United Nations agency UNCTAD. In Zanzibar “it takes an average of three to five days, and sometimes even 15 days”, Khamis admits. It’s not that Zanzibar does not work hard: every ship that does arrive gets offloaded immediately, but capacities are scarce and outdated. Waiting time at sea can be three to ten days.

“Zanzibar has outgrown its port by population and economic growth”, Akif Khamis sums up the situation.  95% of Zanzibar’s imports and exports as well as passengers, go through the maritime port in Malindi, built in the 1920s. Most ships calling here don’t come from afar but are so-called feeder vessels mainly from Mombasa, Kenya and some direct charters from Dubai.

“We have identified not one trouble area, but several”, says Khamis, who has a degree in automation engineering from Malaysia and a master's in energy economics and finance from Aberdeen in Scotland: ”And for a long time nothing was done about it.” But now, port director Nahaat Mhfoudh and his deputy have a clear presidential mandate: to improve the chronically congested bottleneck of the island’s economy until Zanzibar’s new port terminal in Mwangapwani is ready.

The planned giant multi-purpose port for containers and dry bulk cargo - financed with the help of Dubai, Abu Dhabi and Oman (THE FUMBA TIMES reported) - “shall be built by 2025”, Khamis said. The super port will be capable to handle one million 20-foot containers annually, the port in Malindi presently handles 80,000. The government “is currently in engagement with prospective private investors about the project”, he adds.

In the meantime, interim solutions to improve the situation in Malindi are in the making. An additional inland container storage facility would greatly help to win space,  yet it is controversial since it would bring lots of heavy traffic on the road.  Another urgently needed relief for the Malindi port would be the digitalisation of processes. “We are working on both”, says Khamis.

What are the real trouble spots at Malindi port?

EQUIPMENT: The devil is in the detail, the saying goes. Malindi has only one specialised automatic harbour crane (a 64-ton Liebherr model) and rarely spare parts for it. Instead, Zanzibar uses manually operated cranes and the vessels’ own cranes. That delays the work. Specialised tractors (“reach-stackers”) are missing, too. “Even one more super crane would offload 15 instead of three containers per hour”, explains Khamis, while he is taking me around. Good news: Heavyweight additional technical equipment including a digitalised weighing bridge has now been procured to finally overcome the most notorious constraints.

LOCATION: Containers are dangling dangerously close over our heads; enormous tractors are manoeuvring in very little space. Just next door, hundreds of passengers are streaming into the ferry terminal where not even a drop-off zone for cars exists. “Congestion is another major cause of inefficiency at the Malindi port”, says the port manager.

It is also a heritage issue: The historic location with its beautiful warehouse-type buildings is UNESCO-protected and cannot be changed. “It would be ideal as a scenic leisure port with curio shops, yachts and dhows and add value to the tourism market”, says Khamis – and the government is planning to do just that. There are also plans to decentralise ferry services in Zanzibar.

For now, because the port quay is only 200 metres long, only one large container or cargo vessel can enter at a time. Containers are off-loaded at random, making it difficult to locate them when customers come to collect their freight. Empty containers are shifted at night to Bwawani for interim storage. Everybody in Zanzibar has seen the huge towers of rusty containers “parked” there. Khamis’ count on a given day in May: 2,300 of them

Still, I don’t understand: Why do they remain there, and for how long?  “The container pile was caused because shipping lines offload more containers than they take back to reduce their turnaround period”, Khamis explains the calamity. But also here, there is light at the end of the tunnel: “The port management has successfully negotiated with shipping liners. They have now accepted to take the same amount back as they offload”, says the manager.

HUMAN FACTOR: As we watch in awe a port worker placing one 20-foot-container on top of another with the precision of a ballet dancer, I am shocked to hear that the man who is obviously a specialist is paid just a worker’s minimum. “A modern port needs a modern salary structure; wages have to be adjusted”, says Khamis. 600 people work in the port 24/7 in three shifts.

Another trouble area: some customers “use the port as storage facilities”, says the manager. To improve the situation, a one-stop service centre is planned to streamline the entire documentation process. An e-system would give customers clearance deadlines. In return they’d “have to provide advance documentation and pay advance clearance tax”, explains Khamis. A team from Zanzibar has been sent to Turkey to test a digital port system there. But there is something else lacking: “Mentality must change from government operation to corporate thinking”, Akif Khamis is convinced. Even private stakeholders may be brought on board.

When all this will happen, remains to be seen, but the port manager is confident: “Once we are modernised, people will appreciate our contribution to Zanzibar’s economic  growth.” And with a smile, he adds: “Then everybody will start liking us, instead of shouting at us.”.

Fumba can pride itself on some skillful youngsters building mini dhows, larger than a tiny toy but smaller than real boats. Their role models: village elders.  One can see them when the sun is about to go down. Young buys treading towards the sea, passing the new Pavilion shopping centre, crossing over to Fumba Town […]

Get ready for surf and soul

First-ever residential resort in Zanzibar opens. The leisure complex, The Soul, on the East Coast offers a completely new spin on tourism on the island - and lots of fun for global nomads. Christo, the famous wrapping artist, would surely have loved it. A huge black fabric covering an entire block of new apartments dropped […]

The cosy home of Mr. Mwatawala

A bar counter on the balcony. An airy open kitchen. A feeling of space in a tiny two-bedroom – how an architect worked miracles in his Fumba apartment. Aaaah, finally on holiday! The apartment of Shabani Mwatawala, an architect from Dar, certainly feels like a 5-star hotel room. From his bedroom, from the living room […]