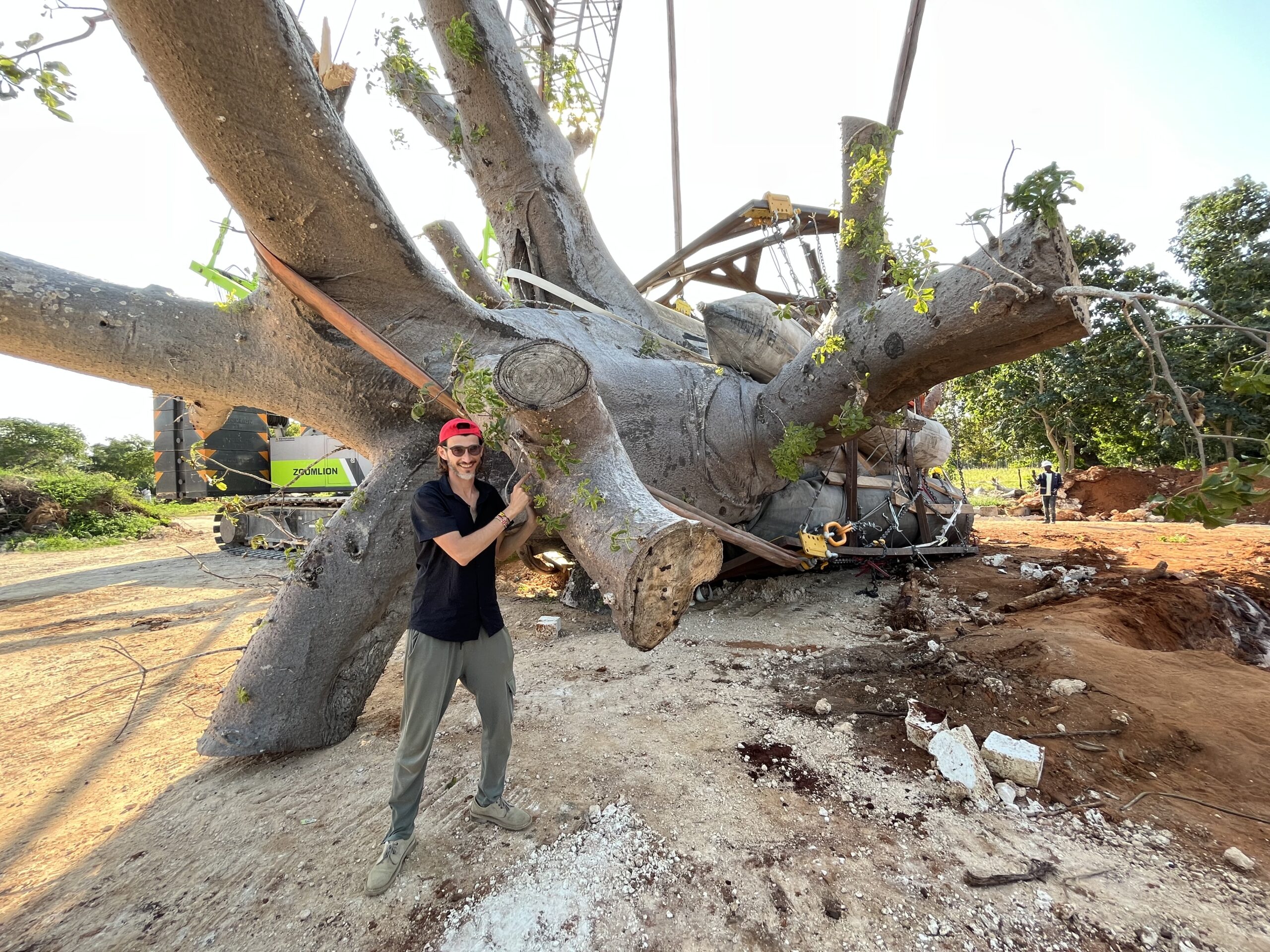 The man who saves the giants

Translocating Africa’s most ancient natural treasures is a most sensible undertaking. By any means.

Yes, “one could call it an unethical business.” George Gvasalia is the first to acknowledge the sensible nature of his most unusual undertakings in Africa. The young entrepreneur, nature lover and environmentalist from Georgia exports Baobabs, Africa’s largest, oldest and most mythical trees, to botanical gardens all over the world.

It’s not a business where quantity counts but quality  - and survival. It can take months, even years to plan and actually carry out the relocation of just one single of the giants. The excruciating uprooting with heavyweight machinery, the construction of “a cradle for the tree”, as Gvasalia calls the cage-like protective unit, the uploading onto special oversize-trucks, the delicate overseas journey.

“For some transports we have to built a new road from the tree to the coast. And of course, they wouldn’t fit into any container on a container-vessel, but need special barges to be transported on”, 38-year old George explains.

It’s a multi-million dollar enterprise with a whole team of specialist from botanists to engineers – each time. George Gvasalia has participated in about 20 Baobab relocations, he says, mainly from Australia. Most of the buyers are ambitious botanical gardens. In his home country Georgia, an 11-million-dollar greenhouse was to be built to exactly simulate the weather conditions and humidity of Kilifi area in Kenya, where the Baobab was exported from: “The transplantation was successful”, says Gvasalia.

As a life spectator, or even just looking at the images, one almost seems to hear the tree moaning when it is lifted from the red African soil, where it might have rooted for hundreds, even thousands of years. Radio-nuclear kits are used to establish the age. Baobabs unlike other trees do not have growth rings in their stem. “The Kilifi baobab was older than Jesus Christ”, Gvasalia says.

How justified or even legal is the translocation of a Baobab – or other tropical trees and timber? Not everybody can travel to Africa, Madagascar or to Australia’s outbacks to see the iconic tree in its natural surrounding, the argument goes.

Cites, the United Nations organisation protecting worldwide over 38,700 endangered animal and plant species, has placed only one Baobab tree in special focus, Grandidier's baobab (Adansonia grandidieri) from Madagascar which has been “under pressure from massive exploitation for its fruits, seeds and seed oil traded both domestically and internationally”, CITES says.

Only very few specialists in the world are qualified to relocate Baobabs, among them botanist Corné Maré who planted most of the tropical trees around the Burj Khalifa in Dubai: “I learned a few tricks from him”, George Gvasalia.

“We always offer and suggest to governments adequate replanting efforts”, assures timber expert George Gvasalia who deals with a variety of rare woods and seaweed besides Baobabs. “But our offer is often rejected or overheard”, he sighs. With Kenya he has found an agreement to save Baobabs by relocation which would otherwise fall victim to roads and other construction. A Buddha statue, for instance, he explains, has to be made from rosewood.

One tree, one continent?

Notable is the existence of giant Baobabs on the African continent, Madagascar, in Australia and India, backing the evolutionary theory that the continents were connected over 250 million years ago.

Baobabs or Baobab fruits can be seen in the National Botanical Gardens of Ireland, at the Kirstenbosch Conservatory in South Africa, in Bengal and the New York Botanical Garden, to name a few. Some have planted the seeds and meticulously watched a tree grow from it over decades like the „Tropical Dream Center“ in Japan where each blossoming and fruition makes local news headlines.

Arabian countries, according to timber and tree specialist George Gavasia, are nowadays most eager to get an original African Baobab – as an exotic highlight in their desert surroundings.