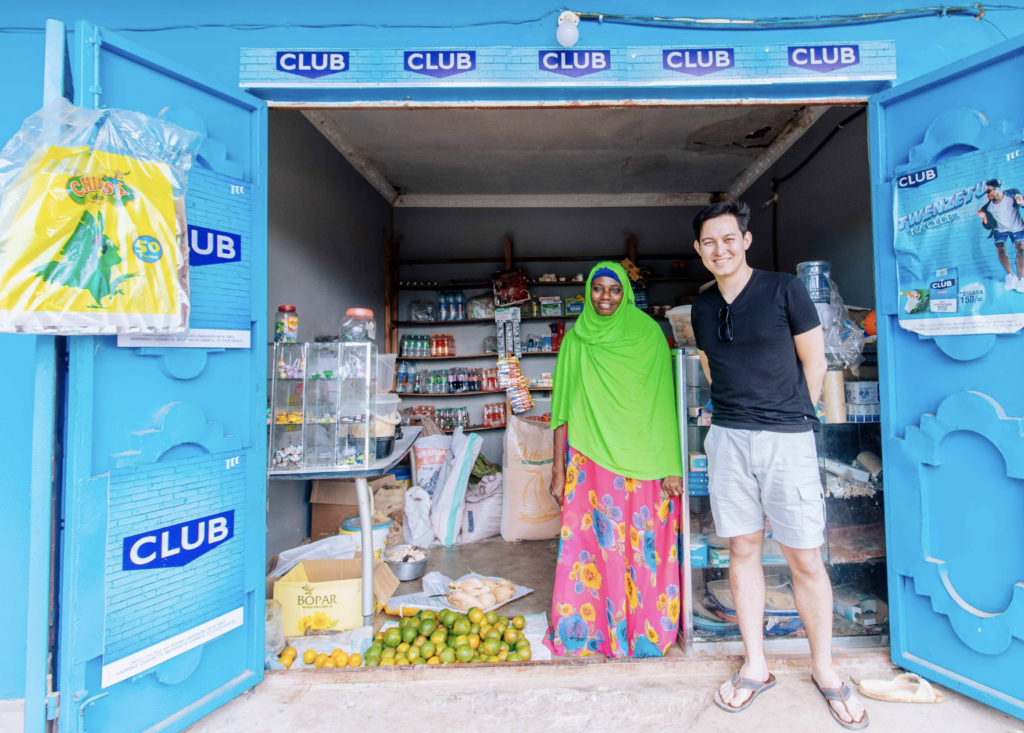 What do dukas (Swahili for shops) and the African tech revolution have in common? A lot, if you ask the Zanzibar government and Wasoko, the continent’s fastest growing company, which has just moved its base to Fumba Town.

The Zanzibar government is set to make the tropical island of white beaches, tourism and ancient culture a centre of tech in Africa by starting an initiative ‘Silicon Zanzibar’ with wide-ranging incentives. The first tech giant, Wasoko, initially from Kenya, has already arrived here. Other tech companies from across Africa are to follow. The physical base of the new digital world is Fumba Town, the modern seaside community just southwest of Zanzibar City.

Suddenly there were colourful pillows placed on an office veranda, beanbags in a meeting lobby. Vibes and looks changed drastically in recent weeks in Fumba Town, the flagship development of German engineering firm CPS, which is constructing thousands of shining white residential and commercial units along a 1.5 kilometre stretch of seashore close to the airport. Overnight, Wasoko – a tech firm focussing on changing duka trade and essential goods deliveries in Africa   – had rented dozens of houses and apartments here and relocated 40 elite young team members including its CEO to the island. Penina Agure, 25, a tech supporter from Kisumu, Kenya said about her new working environment: “All is at arm’s-length; the houses are really nice and not too complex.”

The surprise initiative for Zanzibar – which for now gets 80 per cent of its foreign exchange earnings through tourism - was to be officially launched at a VIP-studded inaugural event in Fumba Town on August 30 in the presence of Zanzibar’s president Dr. Hussein Ali Mwinyi and other dignitaries. Zanzibar Minister of Labour, Economy and Investment, Mudrik R. Soraga, explained: “No longer will tech companies need to open offices and move their people to Dubai or London to manage operations in Africa.”

‚Silicon Zanzibar’ will streamline the issuance of work visas to skilled tech workers from across Africa and beyond, it was announced. Also under debate are tax incentives to participating companies. In return Wasoko, for example, has offered to help develop IT curricula for Zanzibar university and train interns. “Silicon Valley was successful, because it invited the best and brightest from all over the world”, says Daniel Yu, the founder and CEO of Wasoko, “tech knows no borders.” According to experts, tech companies in Africa received over six billion dollars in financing in 2021, making it the continent’s fastest growing major industry.

No walls, no fences – that’s Fumba

“The start-up atmosphere of Fumba Town and new tech companies like Wasoko perfectly inspire each other”, noted Fumba town chief developers Sebastian and Tobias Dietzold. “CPS supports developing vibrant communities that add value for investors, such as Wasoko, with a core purpose of empowering the Zanzibar people and businesses.”

Coincidentally, both ventures – Fumba Town and Wasoko - were started in 2015. The African town built on eco principles with waste recycling and permaculture gardens will eventually house around 20,000 residents. It is the first project in Zanzibar where foreigners are free to buy. Wasoko, meaning “market people” in Swahili, is valued at $625 million after receiving over 145 million dollars of equity financing. According to the Financial Times it is Africa’s fastest growing company, now operating in seven countries and 30 cities. “We had been looking for a location where we can bring together the best talent from across the continent in a creative hub”, said Daniel Yu. “We chose Fumba Town and Zanzibar because it is a globally attractive destination, a facilitating environment and we found the Zanzibar government very supportive. No walls, no fences, no compounds, to us Fumba is like a campus”, he added: “We are honoured to be a founding partner for Silicon Zanzibar, and expect Wasoko to be the first of many tech companies to establish a presence on the island.”

Dukas, as trillions of informal, kiosk-like shops all over the continent are called in Swahili, are at the heart of operations of Wasoko. Collectively they sell an incredible $600 billion of goods every year. Just like Amazon, Wasoko is an e-commerce platform - except that it is not selling and delivering to individual customers but to shops. One duka serves about hundred people, is the equation. With Wasoko they can place orders through SMS or mobile app, receive free same-day delivery and, importantly, pay-later-financing schemes. It works with 70,000 merchants across Kenya, Tanzania, Rwanda, Uganda, Côte d'Ivoire, Senegal and Zambia. “Fast moving goods will become cheaper too with the new model”, says Yu.

The dynamic 29-year old entrepreneur, whose father is a medical doctor from Hongkong and his mother a pharmacist from California, developed his business model in a village in Sinai in Egypt while on a study trip: “The local trader never had anything and it was much too expensive.” His e-commerce scheme won a competition in Chicago; Kenyan based Unilever and others bought into his concept - and the university dropout never looked back. “We are still not making profit”, says Yu, who speaks eight languages including Mandarin and Arabic: “To built e-commerce in Africa requires long term commitment.” This echoes what Amazon founder Jeff Bezos once said: “We were an overnight success in ten years.”

Whatever it takes, holiday destination Zanzibar might just become for the continent what the famous Silicon Valley near San Francisco became for the world in the 1980’s - a door into a new age with vast changes for image, economy and education.

"We are listening to our clients'

Rayah Iddi sets an example as the first woman construction project manager in Fumba.  The Moyoni homes in Fumba Town stand out for several reasons. Entirely built in pre-fab timber technology, the fifty or so low-rise apartments around a communal pool (still in the making) are designed for young families - and their construction is […]

Some like it hot, some African traditional, others with a touch of Asia. These three recipes are the bestsellers in Fumba Town’s first kiosk restaurant which has been serving the community since 2018. Paulina Mayala, 28, born and raised in Zanzibar, is executive chef of the popular Kwetu Kwenu – Swahili for “my place is […]

All roads leading to Fumba

Fumba Town is getting two top-notch public roads and public water access, all to be completed this year. Finally, two brand new tarmac roads will connect Fumba Town to the rest of the world. The roadwork is in the making and expected to be completed within weeks latest by November according to the contractor. The […]